Hulk Hogan, whose real name is Terry Bollea, filed the 18-page lawsuit in Florida against his former wife, claiming she lied and defamed him in her new book.

It claims that Linda Bollea wrote the book, ‘Wrestling the Hulk – My Life Against the Ropes’, to help revive her career.

In the book, she wrote that her husband abused her during their marriage and had homosexual encounters.

She also claims, ‘Hulk tore my shirt, threw lamps, and held me down on the bed with his hands around my throat during arguments.

‘I was always afraid he would kill me in one of his rages.’

During an interview in June, she alleged that Hogan had a homosexual relationship with a fellow wrestler. Hogan says the claims have harmed his reputation.

His lawyer, Wil Florin, said yesterday: ‘Miss Bollea’s made enough of these outrageous allegations that it’s time they stop, the only realistic way of making them stop is through the court system.

He is demanding a jury trial and a halt to his ex-wife’s comments.
He says she has also made claims during promotional interviews on national television.

Linda Bollea received more than 70 per cent of the couple’s assets in their recent divorce settlement. 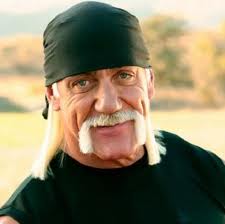