Researchers from Rutgers University and the University of Virginia, in America, conducted a series of experiments with young children aged between 11 months and just over three years old involving live animals and toys.

Parents should consider having a pet in the home to help their child learn and develop, expert said.

In addition toddlers are not naturally afraid of spiders and snakes but learn this behavior as they grow, they said.

“The fact that children find animals so appealing suggests that children may benefit from having an animal, like a pet, in their lives.

“Our research develops the idea that animals may be a good instrument for learning. This is borne out by the widespread use of animal characters in children’s books and TV programs,” according to Vanessa LoBue, assistant professor at Rutgers University.

In three experiments conducted by researchers, they presented a variety of toys and live animals to children in a room in each experiment, where the animals were safely enclosed, all out of reach and the children could not touch them.

Children as young as 11 months showed more interest in live animals than toys, even ones made to replicate real living creatures, it was found.

Young children prefer live animals to playing with toys as a study has found humans have a natural affinity for wildlife.

The researchers wrote in the British Journal of Developmental Psychology: “It is important to point out that although these differences were significant, they were subtle and avoidance behaviors were extremely rare.”

Many researchers might find these results surprising, as they suggest that children prefer snakes and spiders than to a group of highly attractive toys.

Prof. LoBue added: “The implications are that children are really interested in all animals from an early age, and that fear of threatening animals is learned at some point in development.

“The implication is that fears, even our most common ones, are learned at some point in development, and the next step is to examine how they might be learned so that we can avoid the development of intense fears and phobias.” 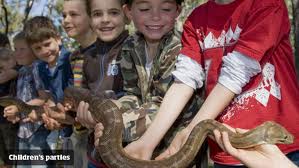