The Philippine based International Rice Research Institute (IRRI) was instrumental in the launching of the 1970s ‘Green Revolution’ which helped millions of Asians achieve self sufficiency in rice, Asia’s staple crop.

In the 70’s, the Rice Institute has recommended significant use of chemical solutions to agricultural problems, but now it says, it is time to adopt for a more environmentally friendly approach in controlling pests.

IRRI said, it had found that pesticides and the lack of ecological ‘diversity’ in rice farms had reduced the numbers of bugs and spiders that prey on planthoppers, a major rice pest in Asia.

The Institute has called rice farmers to cut their use of pesticides that kill the natural predators of the planthopper, one of the most destructive pests of the key crop, the International Rice Research Institute (IRRI) has said.

“Fighting planthopper outbreaks calls for promoting natural planthopper enemy diversity and cutting down on pesticide use,” an IRRI statement said.

The institute also said there was a need to diversify the varieties of rice being planted in Asia, the world’s major producer and consumer region of the staple food.

“We need to seriously rethink our current pest management strategies so we don’t just cope with current outbreaks, but prevent and manage them effectively in the long run,” said Bas Bouman, head of IRRI’s environmental sciences unit.

Growing three rice crops a year or using the same rice varieties for a long period can cause pest populations to adapt and grow in size, IRRI said.

With IRRI’s support, Thailand banned the use of two insecticides for rice, abamectin and cypermethrin — three months ago because their misuse had encouraged major planthopper outbreaks. 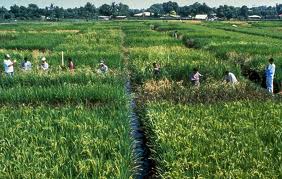