The world’s second largest package delivery company, FedEx, has said that the global economic recovery is widening as Asia showing strong economic growth and the US gaining economic steam.

It has expected a US gross domestic product by about 3% this year, led by the manufacturing sector in line with economist forecast, however, it has also warned that the housing market sector could remain still a problem.

The major positive outlook came after FedEx noted that their fiscal third quarter profit made more than double from the year earlier. It was the first year-over-year profit increase that the shipping company experienced in five quarters.

FedEx has also raised its earnings forecast for the fiscal year ending in May, seeing a continued modest recovery in the global economy.

The strongest economic growth, FedEx believe will continue in Asia, the US and Europe are improving. FedEx has declared that it earned $239 million compared with $97 million a year earlier.

Their revenue rose up by 7% or to $8.7 billion exceeding Wall Street expectation. The company also has said that results were boosted by higher shipping volume particularly at its international express and ground units.

Better volume is a good sign for the company and so with the economy, meaning more consumers and businesses are shipping more goods.

Most of the growth FedEx observed is in its ground segment due to businesses are shipping more packages to other businesses. However, the company said that consumers still “remain cautious”. 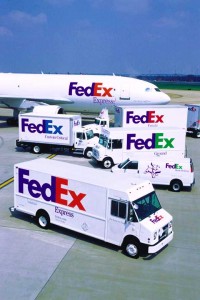