A survey published by the journal Human Reproduction Update in 2002 showed that 1,657 in vitro-fertilization (IVF) procedures per million people per year were performed in Israel.

Compared with 899 in Iceland, the country with the second highest rate, and 126 in the United States, which trailed far behind the European countries.

Unlike countries where couples can go broke trying to conceive, Israel provides free, unlimited IVF procedures for up to two ‘take home babies’ until a woman is 45.

Israel is the world capital of IVF and the hospital which does about 7000 of the procedures a year, is one of the busiest fertilization clinics in the world.

Although the procedures account for one of the country’s largest public health expenditures, the policy is one of the few isues nearly all sectors of Israeli society seem to agree upon.

There is even a pool of single women using in IVF, their efforts are sanction by rabbis.

Demographics here are also political, Israel has historically focused on promoting Jewish birthrates to retain a Jewish majority and more recently a counterweight to higher fertility rates of Palestinians in the occupied territories.

Arab citizens of Israel, however have the same rights to state paid fertility treatments.

Israelis already have a high fertility rate, an average of 2.9 children per family. Beyond the biblical imperative to be fruitful, some Israeli Jews remain concern with replenishing their numbers in the wake of Holocaust.

The booming industry has also provided advantages to Israeli physicians. The large pool of patients with diverse fertility problems has helped them tailor treatments that end with a successful pregnancy, they say.

And because cost is not an issue, there is less pressure to implant multiple embryos, which can lead to larger than desired multiple births.

The Health Ministry says it spends about US$ 3450 per treatment, although some critics say the real cost may be higher.

A major center of the baby making industry is Assuta which performs about a quarter of Israel’s approximately 28,000 IVF procedures a year. At the fertility center there, a laboratory housing 60,000 frozen embryos sits between an operating room where women have their eggs aspirated and a transfer room where the embryos are implanted in the patient.

Hedva Eyal, who works for Isha L’isha, an Israeli feminist organization, says there should be more discussion of the potential emotional and physical toll of the treatment, which includes a battery of hormone shots.

“The unique thing about Israel is that it’s a high tech culture on one hand and very traditional one on the other,” said Sigal Gooldin, a Hebrew University mdical sociologist. “Anyone who lives here is expected to have children.” 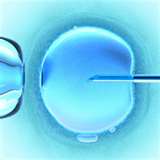