Earlier findings by The Bureau of Fisheries and Aquatic Resources (BFAR) have noted that Laguna Lake has been used as dumping ground for industrial, agricultural and domestic wastes.

Sedimentation and siltation have been caused by massive soil erosion.
Lake water temperature is now warmer than normal. Four power generating plants located in the lake basin have changed its natural ecology.

Oil pollution is regularly discharged aside from accidental spills by the power plants.

Lake water control infrastructures and power generating plants have also caused the lake deterioration because the former has prevented the entry of saltwater, the lake’s natural cleansing agent, while the latter have used chlorinated water which has caused the disappearance of aquatic plants and accordingly changed the natural ecosystem of the lake.

BFAR has conducted a stock assessment study of the lake where a sharp reduction observed in the number of fishermen in the area due to the high rate of exploitation of tilapia, bangus, kanduli, ayungin and biya, an indicator of overfishing.

The most common fishing gear used are fine mesh gill nets and motorized push nets which are both banned. The use of motorized push nets can scrape the aquatic plants in the lake bed and can collect fingerlings and small fish that are not yet commercially valuable.

Presently, only 6 remain out of the 23 lake’s endemic fish. Because of siltation and pollution only 2 out of 13 known plant species remain, and they are the water hyacinth and Kangkong. All bottom dwelling or rooted plants have generally disappeared.

Fisheries in the lake has declined because of turbid waters, overfishing and the decreasing number of fishermen. Turbidity is due to the suspension of mud particles in the water, reducing the sun light for photosynthesis needed for the growth of plankton eaten by the fish in the lake.

The Laguna Lake basin is about 380,000 hectares bounded by 220 kilometers of shoreline. It consists of 27 towns and 117 villages sprawling along its shorelines. About 75,000 fisherfolk in the basin directly depend on lake fishery for livelihood.

At the height of its productivity, Laguna Lake provided about 2/3 of the fresh water fish requirements of Metro Manila and it has also irrigated about 30,000 hectares of farmlands in the vicinities of Laguna, Cavite and Rizal. 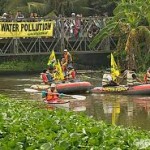 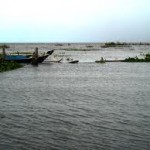