For decades, the standard career path in Japan was to graduate from college, join a company and stay working there until retirement, in short, it’s one job for life.

However, the lifetime employment system in Japan is waning with the bursting of an economic bubble in 1991.

With salaries down more than 12 percent over the last decade amid an uncertain labor market, young mostly single Japanese are increasingly making ends meet by working second or even third jobs.

Despite long working hours, the eight longest in the world, though overtime often going unreported and unpaid, almost half of the workers questioned last year in a survey by the government affiliated Japan Institute for Labor Policy and Training expressed interest in side jobs.

Nearly 90 percent said the main reason was a desire to have an extra spending money. The unemployment rate in Japan was 5.2 percent in July, while it is low by international standards it is close to a record high for Japan.

The economy remains stagnant, weighed down by an aging and shrinking population, deflation and a strong yen which crimps exports.

Recent data from the Japanese Ministry of Health, Labor and Welfare found that almost 56 percent of workers 15 to 34 years old needed another form of income to help pay living expenses.

Disposable income have taken a further hit since the global downturn, with many companies banning paid overtime to save money.

Yoshihiko Noda, Japan’s finance minister said, that the time had come for Japan to take action that would allow “Young people to have dreams and get jobs”

For that to happen, the country may have to help foster entrepreneurship which has often seemed lacking in Japan. But those with side jobs may offer a glimpse of hope. 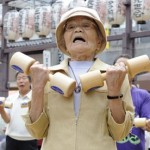