Is Maria Shriver try to give Arnold Schwarzenegger a second chance to make their marriage work?

People cite a source close to the family who reveals that the couple ‘had a really nice time’ over the holiday.

They both spent their Christmas together at their Brentwood, California home with their children, according to a report.

According to the source, they also attended the Los Angeles Lakers’ season opener game at the Staples Center in the afternoon.

Shriver, 56, was by her ex’s side on his 64th birthday in July. The journalist, who filed for divorce from her husband in June, is said to be ‘reconsidering ‘ their divorce.

Besides, the ‘Terminator’ has reportedly been wooing Maria with gifts and being extremely nice to his estranged wife.

But it appears that Shriver is reconsidering the move, after her filing for divorce from Schwarzenegger after his admitting earlier this year to fathering a love child with their former maid Mildred Baena 14 years ago.

The decision for Shriver is said due to a number of factors, including her Catholic beliefs, she has reportedly told friends that she is having some second thoughts. Besides, most devout Catholics do not believe in divorce.

Compounded with Scwarzenegger persistence to woo her back that make Shriver’s decision even more difficult.

Since announcing their split, the couple have been remaining amicable for the sake of their children.
They were even seen attending church together last month.

The former couple, married 25 years before announcing their separation in May, have four children together: Katherine, Christina, Patrick and Christopher. 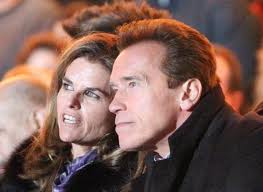