Mothers who breastfeed their babies for at least six months have lower blood pressure and they are less likely to develop hypertension later in life, according to a study.

The American study involving around 56,000 women with at least one child, concluded that mothers who breastfed for at least six months were less likely to develop hypertension over a 14 year period than those who bottle fed.

Researchers found women who gave their babies formula or breastfed for less than three months were almost a quarter more likely to develop blood pressure problems.

While the findings do not prove breastfeeding was behind healthier blood pressure, researchers said it added to evidence that the practice was good for mothers as well as babies.

Current Department of Health guidelines urge all mothers to breastfeed their children exclusively for the first six months of life, if they are able to.

The research, published in the American Journal of Epidemiology, estimated that up to 12 per cent of high blood pressure cases among women with children could be linked to ‘suboptimal’ breastfeeding.

“Women who never breastfed were more likely to develop hypertension than women who exclusively breastfed their first child for six months or more,” said Dr. Alison Stuebe, from the University of North Carolina, Chapel Hill, who led the study.

Previous studies have shown, women who breastfeed have lower risks of diabetes, high cholesterol and heart disease later in life.

Dr. Stuebe said, “If this is a causal relationship, then taking away barriers to breastfeeding could make a difference in women’s health later on.”

Women who had either never breastfed or done so for three months or less were almost one-quarter more likely to develop high blood pressure than women who had breastfed for at least a year.

Factors such as diet, exercise and smoking habits were taken into account.

Dr. Stuebe, cautioned that none of the findings proved breastfeeding itself gives long-term protection against high blood pressure.

She said it was possible that other factors hindered women from breastfeeding as well as contributed to their high blood pressure, such as a stressful work environment. 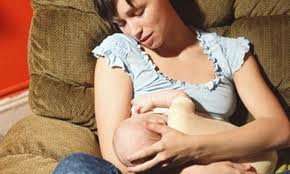