In Chinese tradition shark fins are aphrodisiac and are believed to contain the essence of male virility.

The tradition is still important though in Chinese cuisine, it has to be reviewed whether it has the benefits of medical relevance or just an ancient traditional belief of speculation.

Is there really something to be gained in eating shark fins? Nutrition wise, according to the resources at the Food and Nutrition Information Center of the US
Dept.of Agriculture, the fins which are mostly made of cartilage, are devoid of vitamins.

Proponents of alternative medicine claim that the cartilage has cancer fighting properties but the the U.S. government’s principal agency for cancer research, the National Cancer Institute, only one randomized clinical study on shark cartilage has been made and it has showed the cartilage treatment to be ineffective.

Like some other fishes, the shark has been known to contain high level of mercury than most marine creatures.

In a 2001 report by the watchdog group Wild Aid found that levels of the poisonous heavy metal found in shark fins from Hong Kong , which were distributed to cities all over the world, has been found that they were 42 times higher than safe limits for humans. 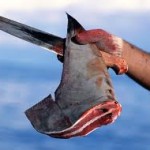