As fish can contain mercury, you have to wonder of how safe it is to add more fish to your diet.

Mercury, a poisonous heavy metal is used in medicine as an important constituent of some drugs and antiseptic agents, and it is a vital component of some diagnostic medical equipments such as blood pressure apparatuses and clinical thermometers.

In agriculture, it is sometimes used as fungicide. In manufacturing, it is used in the manufacture of electrical equipment, some plastics, chemicals and paper. And in mining, it has been utilized in the extraction of some ores from mines such as gold.

However, some of the mercury that is used for industrial, medical and mining purposes find its way into large bodies of water, including oceans, where it enters the food chain. The two common main sources of mercury pollution are mined mercury deposits and the use of mercury in gold extraction.

The level of mercury accumulation among fish becomes higher and higher, one goes in the food chain because the mercury in the prey transfer to the predator.

Sharks, for example, have a very high level of mercury. Tests conducted a few years back, showed that shark fins on sale in Thailand contained level of heavy metal particularly mercury that are forty two times the level considered safe for human consumption.

Aside from shark, fish that are beginning to exhibit dangerously high levels of mercury in their tissue are tile fish, swordfish and king mackerel.

Fortunately, most types of saltwater and fresh water fish contain only minute level of mercury and are still safe to eat. Thus, for most people who have some questions regarding the risk of getting slowly poisoned with mercury by eating fish is not an issue because the body has the capability to excrete minute amounts of mercury.

What the body cannot handle is abnormally high and prolonged exposure to mercury. It is therefore very important that an effective monitoring system for mercury levels in fish especially to high risk areas (i.e. those communities and water bodies near gold and mercury mines).

It is probably safe to say that the fish we commonly eat such as tuna, milk fish, sardines and tilapia are still free from dangerous levels of mercury contamination. Fish especially the deep sea species, contribute to heart health because they contain omega 3 fatty acids and are low in saturated fat.

Although mercury poisoning from fish is still not a major public health concern for the general population, the US Food and Drug Administration (FDA) and Environmental Protection Agency (EPA) are advising the general public especially women who may become pregnant, pregnant women, nursing mothers and young children to avoid some types of fish and only eat fish and shellfish that are lower in mercury.

The fish that are to be avoided are shark, swordfish, king mackerel and tile fish. Commonly eaten fish that are low in mercury are shrimps, light tuna, salmon, pollock and catfish. 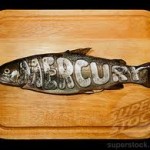