Timothy Bradley joined Top Rank with one objective in mind, to fight the best fighter in the business and get enough recognition for his boxing skills as a fighter.

Bradley believes that his previous promoter (Gary Shaw) has not done enough to expose and give him enough opportunity to compete with the most financially rewarding fighter in the business as in Pacquiao and Mayweather jr., where both are Gates and PPV drawers in their own right.

Bradley believes that if he would be given the opportunity to play either the Pacquiao or Mayweather jr. lotto, and if luckily he wins, he knows his life would never be the same and his boxing career could catapult him a quantum leap overnight.

Luckily, Bradley was among the shortlisted candidates by Arum to be pitted up against Pacquiao with Mayweather jr., as top priority followed by Cotto, a Marquez Quadrology and Bradley the least considered to be Pacquiao’s opponent.

The reason was purely business, because Bradley is not yet an established household name in boxing and has no solid fan base yet to reckon with so it could not be as lucrative if Pacquiao so chooses to fight a Mayweather jr, Cotto or a Marquez IV.

In the next ensuing event, the Pacquiao -Mayweather’s negotiation has bogged down due to disagreement in the purse, Pacquiao wants a 50-50 sharing while Mayweather jr. wants a fixed US$ 40 million share for Pacquiao without him getting anything from pay per view (PPV) which Pacquiao vehemently rejected.

Cotto on the other hand is not amenable to fight Pacquiao for the second time in a catchweight so Cotto preferred instead to fight Mayweather jr. who is more than willing to go up and challenge Cotto with the title at his comfortable weight.

The Marquez IV was not financially viable to hold after that brewing controversial trilogy that has caused the strain among boxing bettors and fans, so it has left Bradley to be Pacquiao’s opponent finally comes June 9.

Since Pacquiao’s announcement that he has 3 or 4 fights left before he retires, Arum is keenly eying for a possible replacement of Pacquiao, one that could continue the legacy to be his next cash cow.

Arum finds it comforting to have Bradley to be his next big thing in Top Rank after Pacquiao.

Arum has qualified Bradley because he is young, undefeated, disciplined, determined to win, hungry for recognition, a family man, and focus solely in boxing unlike Pacquiao who has so many curricular activities and escapades in his arsenal.

It is in Arum’s plan to pit up Bradley with Pacquiao. Arum believes that there is a possibility of a Bradley’s win against Pacquiao in their upcoming fight, that is why Arum has assured Pacquiao a rematch clause in the unfortunate event that he gets upset by Bradley on June 9 in Las Vegas.

Arum has scheduled Nov. 10 as the date for the rematch, a sign that Pacquiao is not looking past the unbeaten American fighter.

‘This is the reason why Arum has not talked about any other fight with Pacquiao other than this upcoming fight with Bradley.’

Arum checked on Bradley’s preparation in the desert city of Indio, California, and was awestruck by Bradley’s confidence level and demeanor.

Bradley is getting the biggest purse of his career and is said to be guaranteed U$ 5 million, a figure that is five times more than his previous best paycheck.

Pacquiao is assured of at least US$ 26 million and should get more once the pay-per-view sales is computed.

A Bradley win comes June 9, means Pacquiao needs to redeem himself in a rematch in November, by this time Bradley will double of what he is getting in his first showdown with Pacquiao.

In the event that Pacquiao would be defeated by Bradley in their rematch, Bradley would eventually become the new cash cow of Arum replacing Pacquiao. 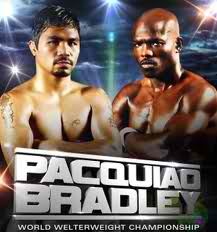