The pair were locked together after 72 holes after the veteran South African had made up a three-shot deficit on the overnight leader with a round of 67.

Both missed birdie puts at the first extra hole – first Dufner from seven feet and then Els from closer in – and they went back down the par-five 18th for a third time in the day.

On this occasion Dufner rolled his long putt up to the holeside with Els just off the green in three after finding sand off the tee.

The veteran was unable to threaten the cup with his birdie try leaving the American to tap in for his first victory after three runner-up finishes.

Els, seeking his first PGA Tour victory since the 2010 Arnold Palmer Invitational, missed his long-range birdie attempt there from just off the left edge of the green.

“It was a tough day,” Dufner, 35, said in a greenside interview after finally triumphing on his 164th PGA Tour start. “Ernie put up a good number today and we were battling it.

“It was just tough trying to get this first win. It’s been tough for about six years out here now, so a little bit of a monkey off my back. I’m excited.”

Britain’s Luke Donald fired a 67 to finish alone in third at 17 under and will regain the world number one spot from Northern Irishman Rory McIlroy when the official rankings are issued on Monday.

Canada’s Graham DeLaet (71) and American Ryan Palmer (69) tied for fourth at 16 under, a stroke in front of American world number seven Steve Stricker (70).

Masters champion Bubba Watson, who won last year’s New Orleans Classic in a playoff, ended his title defense at the TPC Louisiana with a 70 to share 18th place at 11 under. 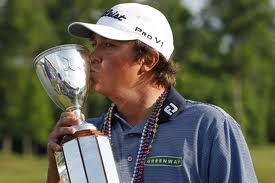