Jennifer Lopez and Marc Anthony have shown as if there’s no strain in their relationship, where the former couple was seen holding hands together publicly despite Lopez having a toyboy.

The estranged couple was promoting their joint new reality television program, Q’Viva: The Chosen, at a TCA breakfast in Pasadena, California.

Although they seemed to have bad blood after announcing their split last summer, the two have been looking mighty cozy lately while promoting their show.

They also looked more than friendly in the trailer for their new Univision series, which explores discovering the world’s most talented Latin American performers.

Their behavior today took the cake in terms of playing nicely, as most former couples don’t hold hands unless they’re trying to send a message of togetherness.

Anthony also reached down to chivalrously to offer Lopez his hand to climb three stairs onto the stage, where they sat side by side in director’s chairs.

The 43-year-old Anthony looked cool in a military-style jacket over a crisp white shirt and blue jeans as they made their way into the Langham Huntington Hotel and Spa while the 42-year-old American Idol judge looked lovely in a blue leather dress that made the most of her fabulous curves.

Despite the split, they remained a happy friendly people with no trace of ill feelings between them, they have moved on with their lives and the two seemed don’t look like a separated couple after all. 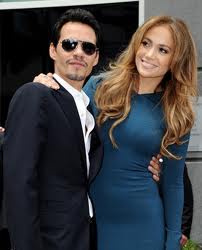