World no. 2 Rafael Nadal and world no. 3 Roger Federer eased to the second round of the Australian Open with routine straight set victories on the opening day.

Nadal dispatched American qualifier Alex Kuznetsov with a 6-4, 6-1, 6-1 victory to reach the second round at the Australian Open.

Nadal said after the match that he was relieved to have played so well despite his knee problem.

The grand slam champion wrapped up victory in just one hour and 46 minutes over the 167th-ranked American throughout the three sets.

The 25 year old Spaniard will face German Tommy Haas in the second round.

On the other hand, Roger Federer advanced to the second round by defeating in straight sets win over Russian Alexander Kudryavtsev 7-5 6-2 6-2 .

The Russian qualifier battled boldly against Federer in the opening set, but could not keep apace with the Swiss.

The third seed Federer admitted after the match, he knew little of his opponent, but his lack of knowledge meant little on court, as Federer ousted his opponent in little over an hour and half.

It was a welcome result for Federer who pulled out of the Qatar Open 10 days ago with a back injury. 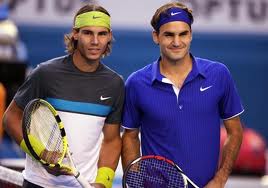