Joshua Ledet was voted off American Idol tonight, leaving Phillip Phillips and Jessica Sanchez to battle for the title on next week’s final.

The result, following a whopping 90 million votes, seemed to surprise the judges, although Joshua seemed to take the news in stride, smiling and waving to the audience.

The 20-year-old from Louisiana, who is touted to land a record deal, then pulled his mother up on stage at the end of his song.

Jennifer Lopez hugs Joshua after she learned he would not be making it through to the final.

Joshua while performing his swansong, James Brown’s It’s A Man’s World, pulled his mother onto the stage for the final notes in the famous soul song.

Earlier, the judges had seemed unable to predict who would get the axe, with Randy telling the three, ‘You guys are three of the best we’ve ever had. All so talented in such different ways. All got big careers in front of you.’

Jennifer added, ‘I just feel like to lose any one of you tonight is heartbreaking for me and most of America. I’ve never felt so connected to each one of you.’

Steven then praised the trio’s ‘courage to have a dream,’ before a shocked Jessica was the first to be put through.

Jessica couldn’t look as Joshua and Phillip Phillips waited to hear who had made the final from host Ryan Seacrest.

Phillip consoled Joshua after learning he had been put through. Jennifer looked teary eyed as Joshua learned he was going home.

The surprise was etched on Jessica’s face when she was the first to be put through to the final.

Jennifer couldn’t hide her joy as Jessica was put through to the final next week. 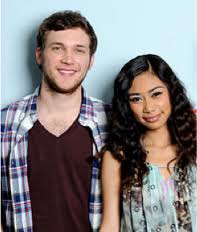