Jane, the daughter of Jim Carrey is currently working as a waitress, explained her motivations to American Idol judges Jennifer Lopez, Randy Jackson and Steven Tyler for wanting to step out into the limelight ahead of her audition.

The 24-year-old said it was hard growing up in her famous father’s shadow but she wanted to give fame a shot on her own.

Jane said: ‘It’s difficult growing up in a shadow trying to find your way.’ ‘I am here to just make my place in the world.’

She bore a striking resemblance to her father and spoke about what it was like having a famous dad.

While Jennifer Lopez remembered Jane, the aspiring singer admitted she didn’t recall meeting Jennifer because she was only around two-years-old.

Regardless of her famous father Jane still had to perform in front of the panel.
But the youngster’s talent proved good enough to secure a ticket to Hollywood.

After learning she had made it through to the next stage Jane called her father to tell him the good news.

Jim Carrey congratulated her daughter for earning the nod of the American Idol judges in qualifying her to the next level. 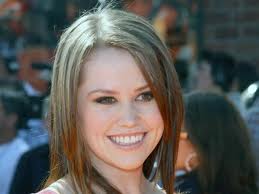