Eating fried food is not bad at all if the food you fry say meat has no animal fat on it and the cooking oil you use in frying, is either monounsaturated or polyunsaturated fat.

In various Mediterranean countries, fat consumption was fairly high and olive oil was the dominant source of their dietary fat but accumulating evidence showed they have remarkably low rates of coronary heart disease.

In a study made by Guallar-Castillón and colleagues, it comprises of 40,757 people (about two thirds of whom were women) and was conducted in five regions in Spain that traditionally have widely varying diets.

Participants were interviewed about their usual diet and food preparation. Sixty two per cent of study subjects reported using olive oil for frying and the remaining participants used sunflower or other vegetable oils.

Generally, frying is considered an unhealthy way of preparing food. Existing data about the association between consumption of fried food and the risk of coronary heart disease are sparse and the findings inconsistent.

The myth that frying food is bad for the heart is not supported by available evidence, according to Professor Michael Leitzmann, from the University of Regensburg in Germany.

However, consuming foods with high fat content means a high calorie intake. This can lead to weight gain and obesity, which is a risk factor for heart disease.

A well-balanced diet, with plenty of fruit and vegetable and only a small amount of high fat foods, is best for a healthy heart.’

The study by Guallar-Castillón and colleagues suggests that specific aspects of frying food are relevant, such as the oil used, together with other aspects of the diet. 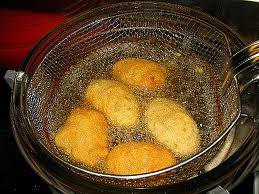