Rafael Nadal has said “a little bit less passion for the game” was one of the contributing factors behind his earlier than expected exit at the ATP World Tour Finals.

The win gives Tsonga a 2-1 record in group play while Nadal fell to 1-2, meaning the sixth-seeded Frenchman will join Roger Federer in the last four from Group B.

It is the first time Tsonga has reached the semifinals at the season-ending tournament for the world’s top eight players, while Nadal missed out for the second time in five appearances.

Nadal struggled with illness during his group opener against Mardy Fish and admitted to being tired when the tournament got under way in London on Sunday despite taking a month off before the end-of-season tournament after a shattering loss to Florian Mayer in Shanghai.

The Spaniard has been one of the leading advocates for a shorter season and the amount playing the sport takes out of him is very evident.

Nadal crashed out of the ATP World Tour Finals on Thursday at the hands of Tsonga.

The Frenchman claimed a hard fought victory and now heads into the last four of the tournament in London for the first time in his career. 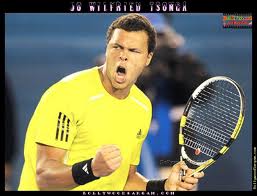