Protesters at Cairo’s Tahrir Square are demanding an end to military caretaker rule in Egypt as they continue to clash with police on Saturday, after rejecting the military’s appointment of a new prime minister.

They have protested the designation of Kamal Ganzouri, a premier under Hosni Mubarak, to form a cabinet.

Tens of thousands gathered on Friday to demand the Supreme Council of the Armed Forces speed up the transition of the status quo to democracy which they believe requires the military caretaker to leave power now.

The military rulers have shown no sign of giving way to the demand to quit now.

Instead, they have responded by promising that a new president would be elected by mid-2012, sooner than previously announced, and appointing Ganzouri, 78, to head a ‘national salvation government’.

The Tahrir protesters have dismissed Ganzouri, premier from 1996 to 1999, as another face from the past whose appointment reflects the generals’ resistance to change.

The violence has fueled public anger at the military council and drawn more protesters to Tahrir Square.

Speaking to the media on Friday, Ganzouri described his task as thankless and “extremely difficult” and listed his priorities as securing the streets and reviving the economy. Egypt’s pound has weakened to its lowest level in seven years.

The demonstration highlighted the division between revolutionary youths wanting to overhaul the whole system and more cautious Egyptians keen to restore normality.

Ganzouri’s appointment has reinforced that divide. 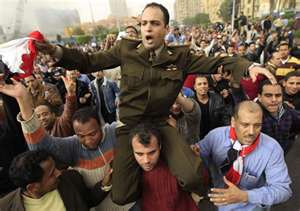