In a surprising twist of events John Travolta was heaped with fresh embarrassment after photos surfaced of him cross-dressing.

The snap photos of the Pulp Fiction star, he was shown wearing a white dress, brown belt, fur stole, earrings and a necklace.

He also wears a face full of makeup, including thick black eyeliner and pearly pink lipstick as well as a blonde wig pulled back into a ponytail.

The photos were obtained by The National Enquirer from a party in Los Angeles that John attended in 1997, just six years after marrying actress Kelly Preston.

A ‘friend’ close to the actress’ says, ‘Kelly told me their marriage is over and made it clear that she’s no longer living in the family home.

Kelley’s put up with John’s double life for decades but all this coming out in public has humiliated her. Kelly is absolutely devastated at the turn of events.

Dressing up in drag, John is certainly no stranger, he wore women’s clothing on the big screen as Edna Turnblad in the 2007 silver screen adaptation of Broadway musical Hairspray.

But in time with his current photo scandal surfacing, it is certainly no laughing matter in the wake of recent reports that he sexually assaulted male masseurs.

No doubt Travolta’s children, Ella, 12, and Benjamin, 18 months, will be affected by the turn of what has happened. 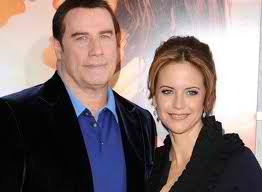