Moneyval, the Council of Europe’s experts on anti-money laundering, is due to rule at the beginning of July on the whether the Holy See has managed to clean up its act and meet international monetary standards.

Ettore Gotti Tedeschi, the Vatican Bank president before he was ousted and former head of Spanish bank Santander’s Italian operations tasked with bringing transparency to the bank came under suspicion in 2010 when he was investigated as part of an inquiry by magistrates into money-laundering.

Tedeschi, 67, was accused of violating laws set up in 2007 that tightened rules on disclosure of financial operations to the Italian central bank in a bid to stamp out money laundering.

He was more recently also suspected of leaking documents and accused in some quarters of serving his own interests.

Tedeschi’s exit comes at a tense time for the Vatican, which has had to deal over the past months with a series of leaks of sensitive documents and accusations of corruption and fraud splashed over the Italian press.

As part of the inquiry, Italian tax police seized 23m euros (US$ 29 million) that the Vatican Bank had tried to transfer from a small Italian bank called Credito Artigiano.

In the wake of the 2010 scandal, an Italian court temporarily seize the amount from the bank also known as Institute for Religious Works (IOR).

The bank’s board of directors unanimously passed a no-confidence vote in Mr Gotti Tedeschi, and accordingly has been removed from his post, the statement says.

Members of the board believed Mr. Gotti Tedeschi’s dismissal was needed to ‘maintain the vitality of the bank’, the Vatican statement said.

The board will now look for a new director to restore relations with the international financial community, ‘based on mutual respect for accepted international banking standards’.

Tedeschi declined to comment on his dismissal. He told journalists: “I’d rather say nothing, otherwise I’d say ugly things.”

This is not the first time that the IOR, which administers accounts held by religious orders, cardinals, bishops, priests and nuns, has made the headlines.

In 1982 IOR was caught up in one of Italy’s biggest fraud cases when Milan’s Banco Ambrosiano, of which it was the main shareholder collapsed, that eventually led to its bank chairman’s death which was found hanging from a London bridge. 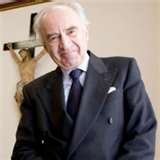