Pippa Middleton and her brother James, have risen to global prominence after they have been exposed during the wedding ceremony of their elder sister, Kate to Prince William.

Pippa and James Middleton are not going to let their reputation be tarnished without a fight.

The Middleton family have taken action after embarrassing photographs of James and Pippa in various occasions appeared on the internet in America.

In one shot, a suntanned Pippa, 27, is wearing a lavender colored bra and a flimsy sheer skirt as she dances provocatively while her brother James, 23, has his hand down his boxers, which are all he is wearing.

The publication of the pictures is understood to have upset the pair’s parents, Michael and Carole Middleton.

The family believe that the pictures, which are understood to have been taken by friends of the pair, were sold for substantial sums to photographic agencies.

They have now stopped and have them withdrawn from circulation after allegedly putting pressure on the photographers who own the copyright.

“The images were withdrawn from the entire market,” confirms John Camarillo, of Zuma Press, an American picture agency. “They were only on the market for a few days. They got too popular and that’s why they were withdrawn.” 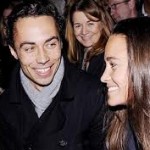