After the marriage of Prince William and Kate Middleton, Queen Elizabeth conferred the titles of the Duke and Duchess of Cambridge on the couple.

Prince George during his time married a ‘commoner’, in the person of actress Sarah Louisa Fairbrother.

As dictated by tradition, the choice of Cambridge as the couple’s dukedom was solely the Queen’s prerogative, while others have suggested Oxford would have been better.

Charles Kidd, editor of Debrett’s Peerage & Baronetage, an authoritative guide to Britain’s aristocracy, said the city is likely to see more of Kate and William.

“I am sure that there will be some benefit for Cambridge,” he said. “It’s nice that it gives the city a royal promotion, not that the city needs it. I hope the people will be very happy.”

Mayor Sheila Stuart said she had sent the couple her personal congratulations after their engagement in the hope a subliminal message might lead them to acquire the title. 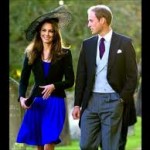