USPGA champion Keegan Bradley carded a level par 71 to win the 36-hole PGA Grand Slam by one shot ahead of Masters champion Charl Schwartzel, who finished with a course-record tying 65 to improve from 3 over to 3 under in Bermuda.

Bradley began the final day of the annual event for the year’s four major winners tied with Rory McIlroy at four under.

But McIlroy fell away with three successive bogeys from the seventh and finished third at level par after a 75.

Masters champion Charl Schwartzel, four behind overnight, birdied five holes in a row in a fine 65 to seal second, but Darren Clarke was nine over after a 74. 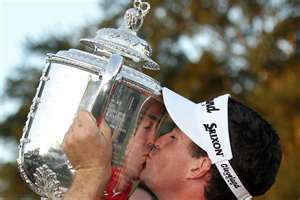