Rory McIlroy shot a four-under-par 67 to share the lead with Keegan Bradley after the first round of the 36-hole PGA Grand Slam of Golf for the four major winners at Port Royal, Bermuda.

The two is well ahead of Charl Schwartzel, The Masters winner who shot a 74, and British Open champion Darren Clarke, who finished with a 77.

McIlroy said that he is very happy. He gave himself so many chances on the front nine and didn’t really make anything, but he finished really, really well.

“It was a bonus to par 16 and birdie 17 in that bad weather and I’m in a good position going into tomorrow,”

The greens were for him very difficult to read. McIlroy think he had spent a bit more time on them maybe he would have figured them out a bit better today.

Bradley, who won the PGA Championship, played an almost flawless front nine which included eagles at the par-5 2nd and 7th, when he hit 6-iron approaches from 220-yards to within 2-feet of the pin.

McIlroy in contrast couldn’t make a putt and reached the turn at 2 under following birdies at Nos. 5 and 7. His troubles on the green continued on 11, however, where he three-putted, but a 30-footer for birdie at 12 changed things.

While Bradley was starting to struggle, McIlroy found his rhythm and after driving to within 10-yards of the green on 15, was the only one of the foursome to hit the green at the par-3 16, when Clarke and Schwartzel hit their tee-shots into the sea and walked away with triple bogeys.

A heavy rain shower turned the closing two holes into a battle, but McIlroy managed to birdie 17 to draw even with Bradley and set up an intriguing final round Wednesday. 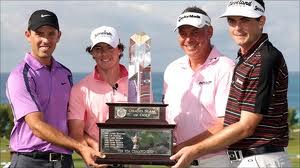