An anonymous kindhearted Saudi citizen has offered to pay for the costs to repatriate stranded Filipinos who have been camping outside the Philippine Consulate in Jeddah for the past two weeks.

For the past three months, over a thousand stranded OFWs including wives and children have been forced to stay in “temporary” accommodation at Madinatul Hujjaj (pilgrim camp) at Jeddah port, paid for by the consulate.

According to Migrante-Middle East, an alliance of Filipino migrants group providing assistance to overseas Filipino workers (OFWs) in difficult circumstances, the Saudi was shocked at conditions in the camp when he visited it on Friday and heard from the group’s leaders of their plight.

Migrante’s regional coordinator, John Leonard Monterona, said that the Saudi man, who requested anonymity, had asked the stranded Filipinos to submit a list of those who already had travel documents.

The anonymous benefactor is quoted as saying that he was particularly “worried about the situation of the children and women staying at the camp as the temperature is rising and summer approaching.”

“He is willing to purchase 120 tickets and we are closely coordinating with his staff,” Monterona said.

“This kindhearted Saudi national understands the deplorable situation of the stranded OFWs.

He had seen them in their tents,” Monterona said, adding a barbed attack on the efforts of Filipino officials. “He has a big heart and a greater genuine concern for our stranded OFWs than our embassy and consular officials.” 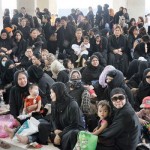