Slash a former member of Guns N’ Roses is to be honored with a star on the Hollywood Walk Of Fame on July 10.

He is the first member of the rock band to receive the pavement plaque.

Slash was the lead guitarist of Guns N’ Roses from 1985 to 1996, leaving after a feud with lead singer Axl Rose, who is the only original member remaining with the band.

Organizers praised Slash as “one of the greatest rock guitarists of all time”.

Charlie Sheen and movie mogul Robert Evans will be among the celebrities saluting the guitar great.

“We are proud to place his name among the stars on our fabled Hollywood Walk of Fame,” Ana Martinez, producer of the Walk of Fame ceremonies, said.

After the unveiling ceremony, Slash will be doing an acoustic performance show and Q & A at the Hard Rock Cafe alongside with singer Myles Kennedy. 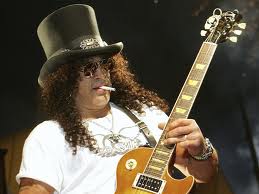