LeBron James, long labeled as one of the NBA’s greats, compared in some quarters to Michael Jordan, James knows such accolades mean little without a title.

Now James, a two-time NBA Most Valuable Player who decided that title might never come in Cleveland, will get his chance as he and fellow Heat superstars Dwyane Wade and Chris Bosh lead Miami into the NBA’s title series starting on Tuesday against the Dallas Mavericks.

His move to Miami almost one year ago had one driving motive in his mind that is to win an NBA title.

For James, it’s not just about justifying his move to Miami Heat, it’s also about expunging the bad memory of San Antonio Spurs’ four-game sweep over his former team Cleveland Cavaliers in the 2007 finals.

Wade, who opted to return to the Heat as a free agent prior to the season, said James, whose decision to join him sparked outrage in Cleveland and beyond, has been struck by James’ intensity.

“He’s focused,” Wade said. “Obviously, we all want it. But in a different sense, he wants this, he wants to seize this moment.

“He’s focused,” Wade said. “You can tell by the way he’s been playing … He hasn’t left anything to chance, whether it’s guarding the other team’s best player, whether it’s taking big shots, doing anything it takes, that’s a player that I see hungry for a championship.” Wade concluded. 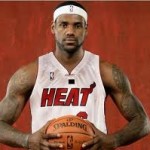