Novak Djokovic will be facing Roger Federer in the semi-final.

Former world number one Federer, the 2009 champion, has made steady progress in the tournament to date and is yet to lose a set.

Djokovic, however, has beaten the great Swiss in their three previous encounters and requires just one more victory to level John McEnroe’s 1984 record of 42 matches unbeaten at the start of a season.

A victory on Friday will also crown the Serb as the new world number one. 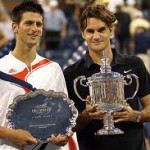