Almost half of living liver donors experienced digestive problems such as diarrhea, intolerance to fatty foods, gastric reflux and severe depression years after they have donated part of their liver for transplant, according to a German study.

In a survey made by University Hospital Essen in Germany almost half of the 83 living liver donors questioned reported health complaints ranging from digestive problems to severe depression.

Experts say that the findings are consistent with past research and highlight the need for medical support before and after the transplant procedure.

In a living-donor liver transplant, a team of surgeons removes a lobe of the donor’s liver to implant in the recipient who has damaged or diseased organ.

The remaining portion of the donor’s liver regrows to full size within two months and Mr. Emond added that the risk of death after donating a large portion of the liver is about 0.10 percent.

Of the 83 donors surveyed, 31 per cent of donors complained about having diarrhea or an intolerance to fatty foods, about 10 per cent complained of gastric reflux and a small number of donors had discomfort at the incision site or in their ribs.

Organ recipients in the U.S. have an increased risk of developing 32 different types of cancer.

The risk of developing non-hodgkin lymphoma was elevated more than sevenfold, according to Dr Eric Engels at the National Cancer Institute.

Part of the reason is because anti-rejection drugs suppress the immune system.

Engels’ team analyzed medical data from more than 175,000 U.S transplant recipients who had surgery between 1987 and 2008.

Around 14 per cent, or one in seven of transplant recipients developed non-Hodgkin lymphoma, which is a cancer of the white blood cells.

Lead researcher Georgios Sotiropoulos, now hopes that the results published in the journal the Annals of Surgery, will prompt improved treatments.

The average age of donors featured in the German study was 36, and their average time since donation was six years.

Organs from the deceased are often used for transplants but because there aren’t enough available, live-liver donors are the only alternative. 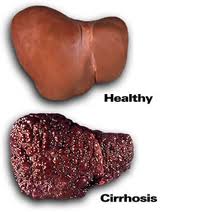 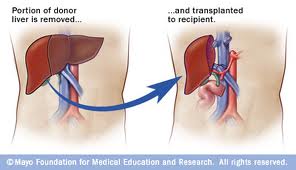