South African Louis Oosthuizen carded a four under 68 in the final round to clinch the 2012 Maybank Malaysian Open title.

Oosthuizen garnered a cumulative total of 271, 17 under par at Kuala Lumpur Golf and Country Club.

The 29-year-old former Open champion, who missed to win the Masters when he lost a play-off to American Bubba Watson, led by three shots ahead of Scotland’s Stephen Gallacher.

Reflecting on the improvements in his game since his 2010 Open triumph at St Andrews, Oosthuizen said, ‘I think winning the major, helped me a lot to get my game where it is at the moment. I’ve just been working quite a bit with my coach Pete Cowen and my game is getting where I want it to be.’

The victory lifted Oosthuizen to second place in the European Tour Race to Dubai behind US Open champion Rory McIlroy.

Oosthuizen struggling the jetlag of travelling from Augusta to Malaysia was surprised himself with the speed of his recovery to make the event.

Gallacher of Scotland remained the nearest challenger throughout and signed off with a bogey-free final round of 70, but could not close the gap.

England’s Danny Willett carded a 71, Spain’s Rafael Cabrera-Bello a 71 and American David Lipsky a 70 were tied for third place on 12 under. 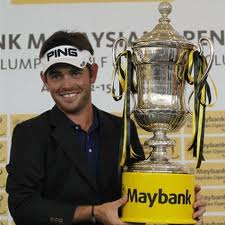