Madagascan Pochard were thought to have become extinct in the late 1990s, but were rediscovered in 2006, when conservationists on an expedition spotted just 22 birds at a single site, Lake Matsaborimena (or Red Lake), in northern Madagascar.

Durrell Wildlife Conservation Trust (Durrell) and the Wildfowl and Wetlands Trust (WWT) launched an emergency mission to rescue the critically endangered birds in 2009.

The aim was to collect eggs in order to start a captive breeding program that would safeguard the species.
The conservationists collected 24 eggs from nests at the side of the lake.

They initially reared the ducklings from those eggs in a hotel bathroom, while a captive breeding center was being prepared.

The ducks that began their lives in that inauspicious setting have now bred in captivity for the first time.
Nigel Jarrett, head of conservation breeding for the WWT, explains why the hatching of the ducklings is such an important conservation milestone.

Eighteen Madagascan pochards, the world’s most endangered duck, have hatched in a captive breeding center.
This brings the world population of the ducks to just 60.

The WWT and Durrell, the groups leading the captive breeding program, say this “builds hope that the bird can be saved from extinction”.

The precious pochards are being reared at a specially built center in Antsohihy, Madagascar.

Dr. Glyn Young, a conservation biologist with Durrell, who has spent much of his life studying the Madagascar pochard, said: “The ducklings represent an incredible step forward in the fight to save the pochard from extinction.

“The arrival of these ducklings has led to real hope that the birds can one day flourish again.”
Madagascan pochards remain extremely vulnerable to extinction from a single event such as pollution or a disease outbreak.

Scientists are studying the remaining wild population closely, in order to understand the reasons behind the species’ decline and to determine the right conditions for releasing birds back into their natural habitat.

Peter Cranswick, head of species recovery at WWT explained that, although Lake Matsaborimena was the “last hiding place for the ducks”, it was “far from ideal”.

“Our initial investigations suggest there is too little food and this may be leading to the low survival of the ducklings,” he said. “In effect, they are starving to death.”

Nigel Jarrett from WWT, who took part in the 2009 rescue mission, explained that the team hoped to find, or even create, wetlands for the birds that were free from the pressures of fishing invasive predators.

He said they hoped to create an environment where the ducks could “survive on their own, and where they can flourish”.

The Peregrine Fund, Asity Madagascar and the Madagascan government are partners in this conservation project. 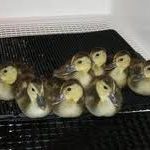