The number of foreign maids in Malaysia has dropped to about 220,000 from about 270,000 in 2008, according to the Malaysian Association of Foreign Maid Agencies.

Few maids from other countries have been coming in to replace the Indonesians, said Jeffrey Foo, the association’s deputy president.

For most people, the luxury of a live-in maid is a fantasy in Malaysia, however, even though the annual per capita income is just 25,000 ringgit or US$ 8,100, maids came to be common in middle class households, thanks in large part to a low paid Indonesians labor pool.

But more than a year ago, after horrific reports of beatings, rapes and other abuse of maids by Malaysian employers, Indonesia barred its citizens from taking new jobs as domestic workers here.

Aegile Fernandez, consultant manager of the Anti Trafficking in Persons Unit at Tenaganita, said many domestic helpers worked long hours, starting as early as 4:30 am. Many complain that they do not receive a weekly day off and that their employers often withhold their wages and take away their passports so they cannot return home or seek other jobs.

Indonesia wants Malaysia to guarantee a minimum wage; the typical monthly pay for Indonesians has been less than US$ 200 dollars. It wants to ensure that domestic workers received a weekly day off. And it is asking for better enforcement of the law allowing them to hold onto their passports.

The agencies say they have tried everything they can think of to find more maids, recruiting in other countries, like Cambodia, and trying to persuade the Malaysian government to lower minimum age requirement for foreign maids to 18 from 21, to no avail.

“Now, I have to do it all by myself,” complained Ivy Lim, a mother of two who has been looking for a new domestic helper for the past three months.

After her last maid left, Ms. Lim said, she had to give up her full time nursing job so she could do household chores and be at home when her children return from school. She is one of about 35,000 Malaysians said to be on waiting lists for domestic helpers.

According to Ms. Aegile Fernandez, some Cambodian girls as young as 14 had turned up at the organization’s shelters in Kuala Lumpur after running away from their employers. Some said they had lied about their age so that they could work in Malaysia, she said.

Rozumah Baharudin, a university professor who has researched the effect of maids on family life, said the number of Malaysians employing domestic helpers had increased in recent years as more women joined the work force.

She and her husband have employed an Indonesian maid for five years, and she said she is lucky to be able to come home without having to think about chores. Something that an employer can walk in the door and the clothes have been washed, the floors have been mopped, and dinner is ready on the table. 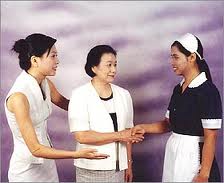