World no. 1 tennis player, Novak Djokovic has extended his season record to a spectacular 51-1 after defeating Frenchman Gael Monfils 6-2 6-1 at the Rogers Cup tennis tournament in Montreal.

It has also set Djokovic, a repeat showdown with another Frenchman whom he fought in the Wimbledon, the 13th seed Jo Wilfried Tsonga, with his 6-4 6-4 win over eighth-seeded Spaniard Nicolas Almagro.

In recent days, star players Rafael Nadal, Roger Federer and Andy Murray suffered upsets, but Djokovic looks to be getting stronger each day as he used his overpowering forehand to improve his 2011 match record to a full house at Uniprix Stadium.

The powerfully built Tsonga, who has upset two-time champion Roger Federer in the third round, was never threatened by Almagro.

There was another upset, though, as unseeded Janko Tipsarevic of Serbia ousted seventh-seeded Tomas Berdych 6-4, 6-4 for his third victory in three meetings with the Czech player.

Fish has already passed Andy Roddick as the top-ranked American player, a status he will almost certainly take into the U.S. Open, which begins in two weeks. 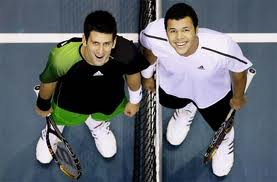