Malunggay (Moringa oleifera) as known in the Philippines is a poor man’s vegetable and yet multi-rich in vitamins.

Its leaves and green stem as animal feeds increased cattle’s gain in weight up to 32 percent and increased their milk production from 43 to 65 percent as per Nicaraguan experience.

In a research, it is also one of the scientifically proven forage species that improves lactation in dairy cattle.

Besides, the plant-growth spray made from Moringa oleifera leaves increased crop production from 20 to 35 percent, based on a Nicaraguan study.

Moringa meal, which was sourced from the leaves and the seed kernels of the moringa plant, has recently been recognized as a superior livestock feed meal substitute by the NGO.

The Philippine livestock industry has been importing soybean meal from the United States and by adopting moringa meal as its source of high protein feedstuff, the country can save approximately US$ 238 million in importation costs annually.

For many years the Philippine has been almost solely dependent on soybean meal importation for their source of high protein feedstuff.

But with Moringa meal as substitute to soybean meal, it now allows farmers as well as feed millers the opportunity to maximize their income in the process.

Based on Biomasa study, in terms of crude protein (CP) content and amino acid variability, moringa meal stand out against soybean meal according to the NGO.

The high protein content of Moringa leaves has to be balanced with other energy food. Cattle feed consisting of 40 to 50 percent moringa leaves should be mixed with molasses, sugar cane, young elephant grass, sweet (young) sorghum plants, or whatever else is locally available.

The maximum protein and fiber content of cattle feed should be as recommended:

For milking cow: Protein should be at 18 percent while fiber is at 26 to 30 percent. 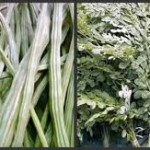