The research has caused a storm of controversy and divided scientists, with some saying it should never have been carried out.

Scientists are pushing to publish research about how they created a man-made flu virus in a laboratory that could potentially wipe out civilization.

The scary virus is more deadly than anthrax, it is a genetically modified version of the H5N1 bird flu strain.

The current strain of H5N1 has only killed 500 people and is not contagious enough to cause a global pandemic.

But their are fears the hybrid virus is so dangerous it could be used for bio-warfare, if it falls into the wrong hands.

Ron Fouchier, virologist, of the Erasmus Medical Center in the Netherlands lead a team of scientists who discovered that a mere five mutations to the avian virus was sufficient to make it spread far more easily.

The research done was part of an international drive to understand H5N1 more fully.
Fouchier, however, is adamant to publish a paper describing how it was done.

The study is one of two which has caused serious debate about scientific freedom and about regulating research which might have potential public health benefits but at the same time could also be useful for bio-terrorism. 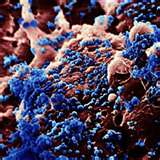