If we are to dissect the life of a Manny Pacquiao, never ever in his dream or in anyone’s wild guess that one day he can captivate the imagination of the boxing world by becoming the pound for pound king of boxing.

Pacquiao’s childhood was not a happy one, being a victim of circumstances of a broken home and poverty. His father left them when he was still a young boy. His driving motivation to become a boxer at a young age is due to necessity rather than by ambition.

Manny Pacquiao’s exposure to the harsh realities of poverty that his family was undergoing during those difficult times made him mentally stronger. To Pacquiao, it was the only way out that probably he could think of to help his mother to make ends met through the prize money he won from every boxing tournaments that he participated in.

From thereon, looking for boxing tournaments wherever it was, was Manny Pacquiao’s sole motivation in sourcing extra income for his family. It was perhaps at this point in his life that he decided to make boxing as his career and made good at it.

Despite the austere training situation experienced by Manny Pacquiao due to lack of financial support in his early career. At any rate, it did not discourage Pacquiao to demonstrate that he has the talent. Although talent alone, as everyone knows, is not enough for a boxer to be successful.

What Manny Pacquiao really needs at that time was a good physical conditioning coach, an excellent facility to work with and a dedicated good trainer to train and put him in shape every time he has a fight in order to stay competitive. These were the realities that Pacquiao has to cope up.

Unfortunately, it was at this point of his career where he absorbed his two losses. Although it was blamed primarily for overconfidence of himself and taking his opponent lightly, it was believed otherwise, that his training preparation and physical conditioning is at par both inadequate as the culprit why he lost in those fights, as observers noted.

With that experience, Manny Pacquiao has learned a valuable lesson that oozing overconfidence alone cannot win fights if it is not fully backed by 100% training preparation and proper physical conditioning to his arsenal.

From that incident he accordingly, made the necessary adjustment as he went along, not to replicate those same mistakes again. Manny Pacquiao, made also a tremendous improvement in his work ethics and has learned to set aside any distraction by staying focus during his training.

It was also a good learning experience for Pacquiao to upgrade his skills every time he has a fight, it was the only way in his mind to excel himself in boxing. From contender, Manny Pacquiao later became the champion in the flyweight division.

As a boxer, Pacquiao showed an extraordinary speed for lateral movement, a bankable power in his left hand, a good footwork and an aggressiveness of a true warrior that make him an exciting fighter by the local boxing aficionados every time he was in the ring. Manny Pacquiao’s explosiveness made the difference and left him the trademark in boxing fans’ mind.

To Pacquiao’s critics he was still yet a raw talent and a one dimensional fighter at that, whose strategy is still far off from being a complete fighter. Through the tutelage of his new coach and trainer, Freddie Roach it made him an improved and a much better fighter, no doubt.

However, Manny Pacquiao’s career made a turnaround when he was given the break to fight Lehlohonolo Ledwaba for the IBF 122 lb title, who was then the current IBF World Super Bantamweight champion that time. Pacquiao came as a late substitute on a few weeks notice and yet dominated the fight, knocking out the champion Ledwaba in six rounds. Manny Pacquiao made a string of IBF title defenses before moving up in weight to fight Marco Antonio Barrera.

The opportunity made a new setting for Pacquiao’s boxing career when he won by an 11th round TKO over Barrera who was then at that time considered as the People’s Champ. It was followed by Juan Manuel Marquez, where despite the knockdowns in their first encounter, Marquez did come back to win the later rounds on judges’ score cards and successfully secure a draw with Pacquiao. In his second encounter with Marquez, Pacquiao defeated him in a split decision.

Manny Pacquiao was then signed up for a match with Erik Morales, at 130 pounds but Pacquiao lost his first fight with Morales by a unanimous decision but he came back a couple months later to avenge that loss by defeating Morales twice by TKO in the 10th round in their second encounter and completely stopping Morales in the 3rd round for their last encounter in a trilogy.

From thereon, Manny Pacquiao never looked back as he moved to the lightweight division challenging the lightweight title holder, David Diaz where he knocked him out in the 9th round dethroning him as champion. He then went to accept the challenge of Oscar de la Hoya where he made him quit in the 9th round with a battered face. It was at this point of his career where his p4p status in boxing was duly confirmed.

He then challenge Ricky Hatton for the light welterweight title who was then the champion at that time. In their encounter Pacquiao knock him out to dreamland in the 2nd round and dethroning him as champion. It was a knock out of the year and that was indeed a spectacular performance of Pacquiao.

Manny Pacquiao then went up to welterweight to challenge the WBO welterweight belt of Miguel Cotto. Both fought up a good fight but Pacquiao prevailed by dethroning him as champion in the 12th round by TKO. It was the 7th division world championship that Pacquiao achieved this time and the first boxer ever in the history of boxing to achieve such a coveted feat.

Pacquiao became popular in the Philippines because of his boxing exploits. He then took advantage of his new found fame when he embroiled himself in Philippine showbiz and in politics at the same time.

His movies were flops while his first running for public office in his own bailiwick was a disappointment when he was handily defeated by an incumbent lady politician, Darlene Custodio in a contested local election in Gensan because the electorate wanted him to focus in boxing rather than becoming a politician.

The majority of his countrymen want him to exclusively focus in his boxing career and they are supportive all the way for him but not in other endeavors of Pacquiao’s interest.

Conclusion: Manny Pacquiao, aka Pacman, became professional fighter despite with no formal amateur boxing record to reckon with. But his oozing confidence and determination were indeed remarkable qualities that made him mentally strong and inspired him to work hard even more whenever he’s in the ring or in training. The traits he possessed were definitely an emulating experience and an inspiration to the youth. 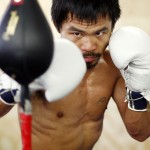