Legendary former Argentinean football player Diego Maradona has been named coach of Dubaï’s Al-Wasl, in a statement released from the club.

The 50-year-old ex-manager of Argentina signed a two-year contract.

“Al-Wasl Sports Club is proud to announce the appointment of Diego Armando Maradona as head coach of Al-Wasl Football Club, in a momentous development that will see the football legend lead the team for the next two seasons,” the club said in a statement.

Maradona, 50, was manager of the Argentina national team of last year’s World Cup in South Africa, but was sacked after they lost 4-0 to Germany in the quarter-finals.

His name had been mentioned in connection with several coaching jobs since then, notably in the English Premier League and in Iran, but nothing came of these speculations.

The Dubai job was first mentioned when Maradona paid a visit to the Al-Wasl training facility and headquarters and club officials said an announcement could be made shortly.

Al Wasl are currently fourth in the domestic league of the United Arab Emirates, 16 points behind leaders Al-Jazira and have been looking for a coach since firing Brazilian Sergio Farias in March. 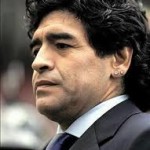