Oscar de la Hoya’s suggestion that Manny Pacquiao should face Juan Manuel Marquez instead of Antonio Margarito after having been denied a fighting license in California is uncalled for. 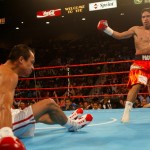 De la Hoya has to understand that the match up between Pacquiao and Margarito supposedly would not be scheduled by Arum for November 13 of this year if he, de la Hoya, as promoter of Floyd Mayweather Jr. is persistent enough to make the mega fight happen with Pacquiao.

As a promoter of young Mayweather he is duty bound responsible to work hard to make the fight happen but what is happening now is that as if Mayweather is flirting the services of promoter Don King and how it will be going, it is still remain to be seen.

On the other hand, Bob Arum is right in saying that Marquez has to prove first that he is a legitimate welterweight by fighting Joshua Clottey or Andre Berto before he can be given a crack by the Filipino superstar.

Marquez recent fight performance with Juan Diaz was not as impressive in their previous clash and that only proved that at 37 he has shown that he is physically deteriorating and soon to retire from boxing.

The move by Marquez to have a trilogy with Pacquiao is understandable because only Pacquiao can give him a good payout. Doing it later do more harm than good for him financially.