The soothsayer octopus Paul has become the world’s instant celebrity in the last 2010 World Cup when he made a correct forecast by predicting the outcome of the eight consecutive football matches including the final where he made a perfect score of eight out of eight in his prediction. 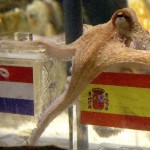 Oracle Paul who is still in his home aquarium in Germany, has joined with soccer star David Beckham, Formula One driver Lewis Hamilton and famous singer Sting which are among the bid ambassadors.

Although the oracle octopus Paul is now officially inactive in his soothsaying activities, his signing to be one of the bid ambassadors is a welcome development and good news for a bid which is marred with a bit of uncertainties.

Oracle octopus Paul, however, will not be moving from his resident aquarium in Germany to an aquarium in England to support the bid for 2018 World Cup.

“After his success during South Africa 2010, Paul, undoubtedly one of the biggest names in football so news of him becoming an official England 2018 Ambassador is tremendous for the Back the Bid Campaign,” fellow ambassador and former Liverpool and England player John Barnes said.