“It’s an amazing feeling to beat the field at The Players Championship,” he said an hour after he parred the final hole to become the first American since Phil Mickelson in 2007 to win it.

The 33-year-old, who started the round a shot behind leader Kevin Na, dropped a shot at the opening hole but hit four birdies for a 13-under total.

Kuchar had passed the faltering 54-hole leader Kevin Na to take the lead at the eighth hole, he never relinquished it. He was tied once. He missed a couple of fairways on the front nine and a couple on the back nine.

But he didn’t miss any must-make shots, he didn’t make any big mistakes, and he won the biggest tournament of his life on one of the most difficult courses in golf to keep a lead.

Kuchar’s previous best finish this season was joint third at the Masters in Augusta and a win in the 2010 Barclays Championship where he beat Laird in a play-off.

Luke Donald came in at third spot with a nine under total who carded a 66 in the final round. The Englishman needed a top-four finish in Florida to take over from Rory McIlroy as world number one but finished sixth. 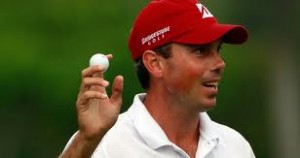