Rory McIlroy and Graeme McDowell tandem of Ireland who shot a 4 under 68, shares a lead with Australia in the second round of the World Cup Golf Tournament in Haikou, Hainan province, Southern China.

The Australians holed an eagle and three birdies to hit a 70 while McIlroy and McDowell made six birdies offset by two bogeys.

Brendan Jones and Richard Green of Australia, their overall score is at 13-under 131 after the second round.

Martin Laird and Stephen Gallacher of Scotland holed four birdies in a 69 to sit a further shot back in third place.

New Zealand pair Michael Hendry and Gareth Paddison recovered from a double-bogey on the par-5 No. 2 to make eight birdies in a 68.

They are tied for fourth on 10 under with Spain and the United States duo of Matt Kuchar and Gary Woodland, who hit four birdies and two bogeys in a 70.

England’s Ian Poulter and Justin Rose are tied for seventh with Mexico and the Netherlands on 9 under.

Defending champions Edoardo and Francesco Molinari of Italy are tied for 10th after shooting a 69, and Edoardo later blamed China’s notorious restless and noisy crowd for their poor performance in the first round. 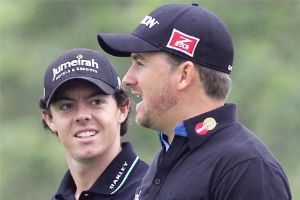