Reconstruction surgery like abdominoplasty is a brisk business in the UK, and despite the recession, it’s a progressing venture.

Its statistics show a record number of male ‘tummy tuck’ operations or abdominoplasty as the rise in demand outstrips that for all other procedures, including women’s breast enlargement.

The number of men opting for abdominoplasty or ‘tummy tuck’ surgery to get a slimmer figure has risen from 108 to 124 operations a year or up by 15 percent.

Tummy tucks proved increasingly popular to women as well, with a rise of seven per cent from 3,039 to 3,251 surgical operations made.

Despite the financial downturn and recent health scares, more than 43,000 people went under the knife for cosmetic operations last year according to annual statistics from the British Association of Aesthetic Plastic Surgeons (BAAPS).

For the first time, the annual audit included fat transfer procedures, where fat is taken from one part of the body and injected elsewhere, mainly into the face to restore volume.

Breast augmentations are still by far the most popular cosmetic surgery procedure for women and have risen year after year.

Man-boob ops, or gynaecomastia soaring, kept its place as the second most common procedure for men, rising by seven per cent from 741 to 790.

Men are spending a fortune on surgery to reduce their breasts. Surgery involves making an incision near the nipple and removing excess fat.

Fazel Fatah, consultant plastic surgeon and President of BAAPS, said: “It is understandable that procedures for the more noticeable areas of the face and body, such as breast augmentation, rhinoplasty (nose jobs) and eyelid surgery, continue to prove popular when patients are looking to get the most ‘impact’ from their surgery to enhance their mental well being and self-confidence.

Rajiv Grover, consultant plastic surgeon and BAAPS President Elect with responsibility for the UK national audit of cosmetic surgery, said: “The continued popularity of aesthetic plastic surgery even through financially difficult times demonstrates that the public sees real value in the psychological and physical improvement that can be achieved. 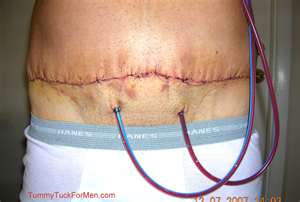