Despite the dismal performance of their top gun LeBron James, Miami Heat vows that they will come back in game 6 to make a turn around and equalize Mavericks lead 3-2 to 3-3 in their NBA finals.

The Mavericks can win their first championship on Sunday, if the Heat will not capitalize the opportunity where they have failed in their last two games (4 & 5).

This could be indeed a ‘now or never’ for James and a ‘do or die of the Heat team. The Heat these past days were under scrutiny by basketball enthusiasts and have been vocal about their execution on the hard court as well as James’ ability to recover while the fans couldn’t help thinking that he is not giving his all in the game.

“We’ve just got to push through it. At this point we have no choice, honestly,” James said. “We’ve got two games left, and we worked hard all year to get home-court advantage. So we have to take advantage of it.”

A Heat victory on Sunday would set up a Game 7 on Tuesday night. Miami hasn’t lost three consecutive games since a five-game skid in late February and early March.

The Heat will try to become the second consecutive team to overcome those odds. The Los Angeles Lakers returned to Los Angeles down 3-2 last year and took the last two from the Boston Celtics.

On the other hand for the Mavericks, “Game 6 is Game 7 for us,” guard Jason Terry said. “We want to play like there’s no tomorrow. If we do that, I have no doubt in my mind we can be successful. We must come out aggressively.”

Shall the Mavericks win in game 6 on Sunday, the real party will belong to Dirk Nowitzki. 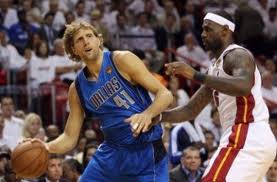