The Miami Heat took the NBA championship after defeating the Oklahoma City Thunder in Game Five of the NBA Finals in Miami, Florida.

The Heat won 121-106 to capture the best-of-seven championship series four games to one.
LeBron James led the way with a triple-double as the Miami Heat completed the win over the Oklahoma City Thunder to secure the NBA title.

The forward racked up 26 points, 13 assists and 11 rebounds as he collected the first title of his illustrious career.

James on Thursday was named the Most Valuable Player of the NBA Finals after leading the Heat to the crown, capturing his long-sought first championship and delivering on the promise he made to Heat fans when he came to Miami two years ago.

Kevin Durant led the beaten Thunder with 32 points, James Harden and Russell Westbrook adding 19 apiece, but the home side were always in control in Florida.

The Oklahoma City Thunder were never able to recover from losing three contests in a row by close margins after opening the finals with a win at home.

Miami used impressive three-point shooting, hitting 14-of-26 from beyond the arc, in front of a sold-out 20,003 crowd at American Airlines Arena.

The Heat also shot 58 percent from the field in the first quarter and never eased up on the Thunder, opening a huge lead with a explosive third quarter, outscoring Oklahoma City 36-22.

Six of their players, including all of their five starters, finished in double figures.
The Heat led 31-26 after the first quarter and pulled out to 59-49 by half-time.

They were more dominant still after half-time, a 16-0 run in the third quarter taking them 25 points ahead at 88-63.

It was 95-71 by the end of the quarter and the fourth was almost a lap of honor for Miami, with James leading the celebrations on the sidelines as the Heat second string played out the closing seconds.

This was James’s third trip to the NBA Finals, including one with the Cleveland Cavaliers, but his first title in his nine years in the NBA.

James was a unanimous choice as series MVP, completing a journey of redemption after he was widely criticized following the Heat’s loss to the Dallas Mavericks last year. 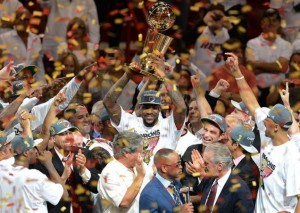