Margarito took a pounding from Miguel Cotto and fought the last few rounds with his right eye shut leaving the Mexican half-blind and, though Margarito pleaded to fight on, the bout was stopped two rounds later.

Cotto beat Margarito into submission in the first nine rounds in New York before the fight was stopped. Cotto improved his career record to 37-2 while Margarito fell to 38-8.

With Margarito’s surgically-repaired eye getting worse each round, ring doctor Anthony Curreri stepped in to halt the fight in between the ninth and 10th rounds, giving Cotto the TKO win.

Margarito controversially beat the Puerto Rican in 2008, but later received a ban for using illegal hand wraps before a loss to Shane Mosley.

Miguel Cotto gained revenge for his 2008 defeat by Antonio Margarito by beating the Mexican to retain his WBA super-middleweight world title.

The New York State Athletic Commission didn’t license Margarito until last week after ordering another examination of his eye, leaving boxing experts to wonder if he now faces possible retirement. 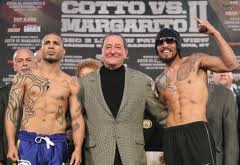