World no. 2 Rory Mcilroy shot a closing round of 65 to finish on 12 under par, two shots ahead of Gregory Havret.

McIlroy captured the US $2.75 million title to keep alive his slim hopes of denying Luke Donald an historic Order of Merit double.

The Northern Irishman can prevent Donald from topping the European money list if he wins the Dubai World Championship and the world number one finishes 10th or worse.

Englishman Donald, who has already won the US PGA Tour money list, skipped the Hong Kong event as did Germany’s Martin Kaymer, who had been placed second in the Race to Dubai until McIlroy’s heroics today.

Alvaro Quiros, who had led or shared the lead in the event for all three days coming into Sunday, faded with a three-over 74 to finish on seven under and joint-seventh.

Juvic Pagunsan’s six-under for the tournament was enough for 10th place and sealed him the Asian Tour Order of Merit, the first time a player from the Philippines has won the title.

The 22-year-old McIlroy had started the final round three-strokes behind overnight leader Alvaro Quiros of Spain but five birdies over the course, three coming while the pressure was building in the run-in to the clubhouse, ensured victory for a player who had finished runner-up here in both 2008 and 2009.

After finding the sand next to the 18th green with his approach shot, McIlory blasted up, out and into the hole to thunderous applause while pumping his fists in celebration. 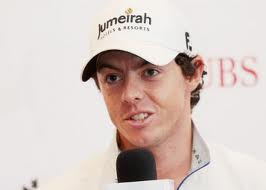