The tattoo artist is asking for an injunction to stop the release of the highly-anticipated comedy sequel, set to bow in the United States at the end of May.

In Mr. Whitmill complaint filed in federal court in Missouri, he proves his point that he owns the copyright of the ‘Original Tattoo’ he has designed for Mike Tyson which the former heavyweight champion has conformed that he owns the artwork.

According to Mr. Whitmill , Warner Bros. Entertainment, Inc., without contacting him, obtaining permission or crediting his creation, has copied his designed ‘Original Tattoo’ and has placed it on the face of another actor, thus the unauthorized exploitation of the ‘Original Tattoo’ constitutes copyright infringement.

Whitmill attaches to the lawsuit his copyright registration for the ‘Original Tattoo,’ as well as Tyson’s signed release granting rights in the work.

Warner Bros. has declined to comment on the suit. 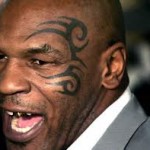