The female share of total global employment is 40 percent and it remains the same as it was ten years ago and the proportion of women seeking work has fallen in several regions including Eastern Europe, South Asia and Sub Saharan Africa.

Women are more likely to be unemployed than men, and they make up the bulk of the world’s “working poor” whose families live on less than one dollar (US $1) per person per day, as reported by the International Labor Organization (ILO).

“The pace with which gaps are closing is very slow” it said in the report. One of the reasons female labor force participation has stagnated is that more women are accessing higher education and staying out of the workforce longer, the report said.

Female literacy rates are lowest in South and West Asia, Sub Saharan Africa and the Arab World, the regions where women are most likely to work in agriculture. Many of these women work as vendors in local food markets and have more difficulty than men in accessing land and credit, the ILO said.

Globally the service sector now employs more women than in agriculture and industry. Men, however, tend to dominate in better paying jobs in financial services and real estate, with most women working in community, social and personal services.

Women are also disproportionately employed in sectors where wages tend to be lower and have been declining recently, the report said, noting a concentration of female employment in “The Five Cs: caring, cashiering, catering, cleaning and clerical.”

“Many of these jobs are in smaller non unionized firms, where women have less bargaining power and less possibility to improve their economic situation,” it said, noting that even high skill jobs pay women only 88 percent of the male wage. 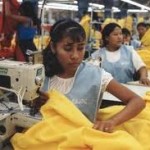